The (hidden) Costs of Vendor Complexity 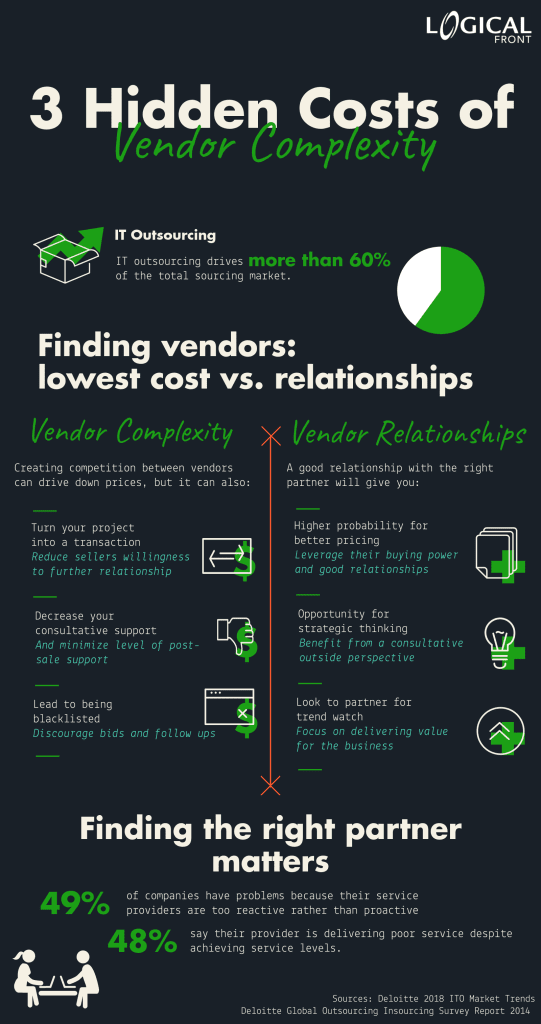 There is a common misunderstanding in IT organizations that vendor complexity is a good thing. Having vendors competing for your business drives down prices and prevents “vendor lock” in your operating environment. At Logical Front, we take a look at the bigger picture- not just what you can save in price on the front end of a purchase, but the long term costs of vendor complexity for the life of your technology purchases. There are real costs in salary and efficiency that are not usually taken into account.

Here’s a real-life example of the costs of vendor complexity in action.

Customer X had a traditional converged technology stack- A Cisco UCS for their server platform, Nimble for shared storage, VMware for the hypervisor, and Meraki networking. Four different vendors to accomplish the most basic of IT needs- hosting and serving organizational data.

Customer X had a problem with their applications hosted on their UCS- reports that used to take 20 minutes were now taking up to 5 days. Obviously, something wasn’t right. So, they opened a support case with Cisco and spent 10 hours running various tests, uploading logs and even taking video of data transfer between the hosts. Everything else worked perfectly, but for some reason the reports were still taking too long.

Maybe it was a problem with the hypervisor?

The customer opened a ticket with VMWare- another 10 hours of due diligence and still, the problem couldn’t be located.

Maybe it was a problem with the storage?

The customer opened a ticket with Nimble- another 10 hours of due diligence, and again, still no indication of the problem.

Maybe it was a problem with the networking?

Meraki and Cisco have different support structures, and another 10 hours was spent with Meraki.

The IT Costs of Vendor Agnosticism

Let’s do the math- 40 hours spent and still the problem wasn’t solved. Several IT staff were involved ranging from first level technicians all the way up to the IT director. For argument’s sake, let’s say that the average salary of a staff member that worked this issue is $70,000. That’s $35/hr and doesn’t include benefits, equipment, office costs or other overhead, just pure salary.

This customer spent $1,400 paying their employees to work a ticket that still wasn’t resolved. Spoiler alert- this ended up taking over 100 hours and nearly 6 months to work out. Over $3,500 paying employees to fix the problem.

This is just a part of the true IT costs of vendor complexity. The money spent quarterbacking support efforts between the different vendors doesn’t show up in your budget, those salaries are already set. But, every hour you pay your staff for these efforts, is an hour they aren’t doing work that moves the business forward. It’s a double set back- hidden costs and decreased operational efficiency. All so you could have a diversified vendor portfolio in your datacenter.

This is one of the many reasons why Logical Front advocates for vendor consolidation when the scenario is appropriate. With Dell EMC’s unified support fabric, instead of opening 4 separate tickets, you would open 1, and they would quarterback the resolution effort.

Building relationships with vendors will not only improve customer support, but also lead to long term benefits. The hidden IT costs of supporting vendor complexity are real, maybe it’s time to rethink the “common wisdom” of vendor complexity.